Cutaneous mets, can present as single or multiple painless lesions (papules, nodules, ulcer) that are discovered at the same time with the primary tumor, before a diagnosis of internal malignancy or many months/years after.

Some studies say breast mets are most common to the skin, some say lung is most common, followed by head and neck and colorectal cancers. In the collective experience of the participants of #dermpathJC, it’s been breast carcinoma metastases.
Here’s an excellent workup algorithm for epithelioid cutaneous mets to the skin. 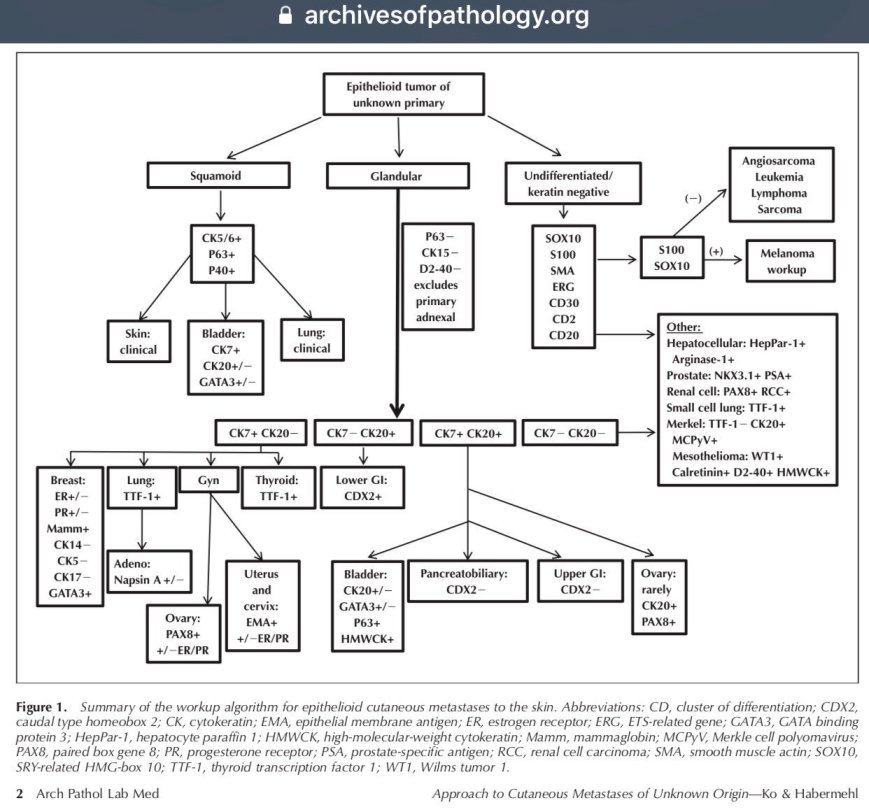 General considerations:
– p63 positive in SCC and in primary cutaneous adnexal carcinomas. CK15 & D2-40 positive in primary cutaneous adenocarcinomas over metastatic adenocarcinomas.
– As such, primary adnexal tumors will generally stain positively for CK7, CK15, D2-40, and p63 and negatively for CK20 and SOX10
– CK7+/CK20- in primary cutaneous adnexal carcinomas, variable CK7/CK20 in metastatic carcinomas.
– SOX10 positive in melanoma, neural and myoepithelial tumors.
LUNG:
– Can be proven with staining for TTF-1, CK7 and Napsin A (non-specific, will stain other tumors, such as large cell neuroendocrine and thyroid tumors).
– Pitfall: some lung adenocarcinomas may stain with Ber-Ep4.
– Small cell carcinoma will stain positive for TTF-1 and CAM5.2, and will be negative for CK7 and CK20.
– Mesothelioma will be positive for LMWK, calretinin, Wilms tumor 1, D2-40 and negative for CEA, TTF-1, and CD31.
GASTROINTESTINAL and HEPATOCELLULAR:
– Most useful initial panel consists of CK7 (non-reactive), and positive CK20 and CDX2. Gastric tumors can be commonly positive for both CK7 and CK20.
– Article seems to suggest CDX2 specific for colorectal primary. Some of the #dermpathJC participants have found this to be positive on many GI adenocarcinomas (upper and lower tract).
– Hepatocellular carcinomas are CK7 and CK20 negative, thus additional markers, such as: HepPar-1 and arginase-1 are helpful.
– In contrast, cholangiocarcinomas are CK7 positive and sometimes CK20 positive, but diffusely CDX2 negative.
GENITOURINARY:
– Renal cell carcinomas: typically nonreactive for CK7, CK20 and positive for pancytokeratin AE1/AE3, EMA, CD31, RCC and CD10. RCC mets are also positive for PAX8, however this is also positive in thyroid, Mullerian, and thymic tumors.
– Pitfalls: CD10 and EMA will stain cutaneous clear cell hidradenomas and sebaceous carcinomas.
– Chromophobe RCC will stain for PAX8, CD117, but will be negative for CD10.
– Urothelial mets: positive for HMWCK, CK7, p63, and S-100P with variable positivity for CK20 & GATA3.
– Prostate adenocarcinoma: negative for CK7, CK20, positive for PSA, NKX3.1, CD57, and Ber-Ep4.
BREAST:
– Both breast carcinomas and adenxal neoplasms are typically CK7 positive and CK20 negative.
– Breast carcinomas typically positive for: CK19, MUC1), ER, PR and mammaglobin, but nonreactive for CK5/6 and TTF-1.
– In contrast, pagetoid SCC will be p63 and CK5/6 positive, but mammary and extramammary Paget’s will be p63 negative and CK7+.
– The most useful IHC to differentiate between metastatic breast and primary cutaneous tumors – majority of the participants recommend p63 in conjunction with history and imaging. Sweat gland carcinomas strongly express p63, CK14, CK5, and CK17, however, the latter three immunohistochemical stains are not readily available in all labs.
– GATA3 stains breast carcinomas strongly, but has also been shown to be positive in trichofollicular and sebaceous neoplasms, as well as urothelial carcinoma, parathyroid gland neoplasms, salivary gland neoplasms, and pheochromocytomas.
GYNECOLOGIC:
– Ovarian and endometrial: CK7+ and PAX8+, Endocervix adenocarcinomas: CK7+ and EMA+/-. All three are CK20 negative and show variable ER and PR expression. Endometrioid morphology ddx includes pilomatrical carcinomas, in this instance p63 will be helpful to differentiate primary cutaneous adnexal neoplasm from a metastasis.
MELANOMA:
– Metastases are S100 and SOX10 positive. Melan-A and HMB-45 can be variable.
LYMPHOMA and LEUKEMIA:
– Authors suggest that CD3, CD20, CD30 and muramidase panel is helpful for initial evaluation of atypical lymphoid infiltrates, however majority of the #dermpathJC participants agree that this is a very limited initial panel and should also include: PAX5 always for B-cells and at least 2 markers for each cel lineage.
SARCOMA:
– True metastatic sarcomas to the skin are extremely rare.
– An entity worth noting: epithelioid sarcoma, which has high metastic potential and high mortality. These show positivity for CD34 in up to 50% of cases, as well as CK AE1/3 and EMA. SMARCB1/INI1 22q11 deletion via loss of nuclear INI1 staining.
That’s all folks for now, until next #dermpathJC, stay happy and curious,
Sincerely,
Silvija Gottesman, MD